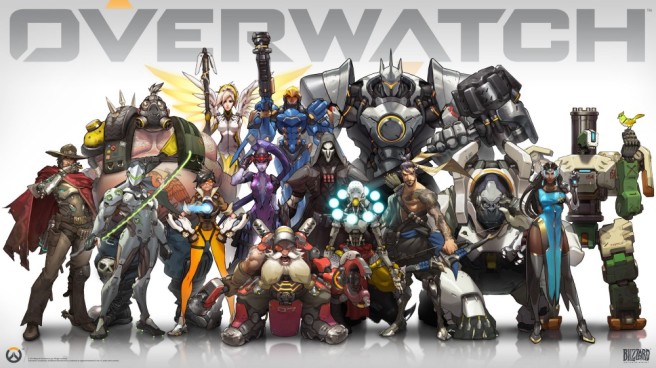 Let me start off by saying I don’t like Overwatch.

At least I didn’t at first when I tried it during beta and early release. I felt it was lacking in content, game types, maps, and substance. On top of all that I feel it cost too much for what is offered. A few well made cinematic’s don’t hide the fact that all the maps in the game are basically hallways designed to force high combat situations. You can call it the Call of Duty effect. Forced encounters with high combat interactions in short to medium bursts over a short match time. New/bad players don’t ever feel useless or bad thus making them have less chance of getting frustrated and quitting the game. Also allowing good players to still do well but still get caught here and there due to just bad luck and counter picking. This is in a nutshell what kept Call of Duty on top of the shooter market for so long while games like Battlefield and Halo have taken secondary niche markets.

I find the popularity of Overwatch to be surprising since gamers are constantly asking for more difficult games but the most popular games on the market are usually for much more casual audiences. Regardless of the philosophy of gaming, is Overwatch fun? As of writing this review and basing it on only the game itself I find it to be an amazingly fun toy. Yes, you have read right. If Battlefield 1 was tactical training with high-pressure BB guns and Halo 5 was paintball than Overwatch would be a bunch of kids in the park with nerf guns. Does that mean it’s not fun? Hell no. It’s a blast. I’m just saying don’t take it so seriously. I have friends on PC talking about team builds, strategy and going up and down in ranks but still doing poorly. On the other hand, I have friends in the top 500 who have prestiged multiple times telling me it’s not that big a deal.

Overwatch has become my “main game” now. When I want to play something seriously or just mess around for a bit, Overwatch is where I go. It plays to a lot of different play styles due to the multiple hero setups and the quick action packed matches. If I don’t feel like focusing and just want to hang out with friends I’ll play something like Mercy or Lucio, maybe Bastion and just sit in a corner and crack jokes. If I really feel like playing I’ll play Reinhardt, Tracer or Soldier. Regardless of how well I’m doing and how I’m feeling at the time, I feel I just like joking around and yelling on mic with friends.

Who you play with will make a big difference. I’m not talking about winning, I’m talking about enjoying. A big part of the reason I didn’t enjoy Overwatch at first is due to the friends I was playing with. They were very try hard and took a very casual game too seriously. They would go on about team composition and timing certain abilities but still consistently lost or had trouble moving up in rank. Having played far more complex and competitive shooters through the years I noticed our losses were more due to bad fundamental skills rather than game knowledge. A lack of communication, not knowing when to push off the advantage, not knowing when to back off the disadvantages and simple things like don’t just funnel in one at a time when their whole teams up. Even when it comes to team composition, just because a composition is strong in the meta doesn’t mean it’s always going to work or be used to its full potential based on who’s playing what. Play around the person, not the hero.

I felt the game was too casual for my taste to play alone and I was only ever getting frustrated playing with friends. I’m not saying I’m the next MLG champ at Overwatch but I know my fundamental with shooters. Regardless of how simple the game and what the meta might be the fundamentals are the most important thing in any shooting game. This is made even more clear when another group of my friends bought me Overwatch as a joke on PS4 for Christmas. All of them that didn’t have PS4s at this point got PS4s for Christmas and Overwatch was the game they decided on over Call of Duty, Battlefield and Titanfall simply because they knew I didn’t like it. A bunch of them already had Overwatch and have now prestiged multiple times. But I and the new PS4 owners went in fresh. They insisted that I would enjoy the game more with them. They were right.

Not only do I have a great time playing with them but I’ve met other friends through playing as well. On top of that, we’re winning more. Why is this? Because they have a strong understanding of the fundamentals of shooting games. We barely have to say when to push and when to back since they are aware of what’s going on. In the moment’s someone does say anything everyone reacts on reflex to what’s said and act accordingly. Sure we still lose our share of games but it’s pretty good for pissing in the wind with half your team drunk off the minds or eating while playing.

Now, this isn’t a PS4 vs Xbox One vs PC thing. This is a don’t take a fun toy too seriously thing. Overwatch is a blast but a lot of people need to accept it’s a very simple casual game at its foundation. Unless you really believe you will be the next MLG pro just have fun and enjoy the game. This kind of extends to all games actually. Overall I really like Overwatch now. I still don’t agree with a lot of what it offers and I do think it cost too much for what they are offering. But if that means we don’t have to pay for future DLC then I’ll live with it. As a game, it’s fun regardless of play style and drunkness. If you have been on the fence regardless of what platform you are on I recommend Overwatch. Even more so if you have chill friends to play with. I won’t be giving Overwatch a rating out of 5 as I would normally do since if I were to break the game down as I do with other games it would end up having a pretty low rating. I feel that would be a bit counter-productive to Overwatch’s overall philosophy. So instead I’ll give it 2 thumbs up and a glass of rum and coke.

They say I’m crazy. I prefer diabolically methodical and devilishly handsome. View all posts by Darkster